Infinergy Australia is investigating the feasibility of constructing an 85 MW (estimated) solar farm and Battery Energy Storage System (BESS) 13 km northeast of Grafton and 9 km southwest of Lawrence. The general location of the proposal is shown here.

The area of land being investigated for the Solar Farm is shown on the plan below and is known as the study area.  The study area has been carefully located on approximately 340 ha of previously cleared and highly modified land.  The final location and scale of the proposal will be sensitively designed within the study area in response to detailed environmental assessments and community consultation. The large size of the study area provides plenty of scope to refine and optimise the design of the Solar Farm in order to avoid, minimise and mitigate potential impacts.

Fully constructed, at a scale of 85 MW, the Solar Farm would produce enough energy to power the equivalent of approximately 45,500 average NSW households each year, while reducing annual greenhouse gas emissions by approximately 150,000 tonnes of carbon dioxide equivalent (CO2e), based on the current energy mix of the NSW electricity sector. 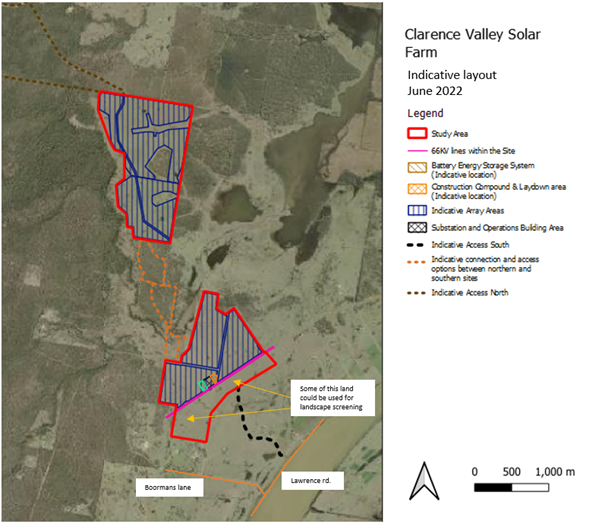 At this stage, the proposal would include the following elements:

Solar Arrays – The largest component of the solar farm would be the solar arrays. Each panel (approximately 2.2m x 1.1m) would likely be mounted on a single-axis tracking system that follows the sun over the course of the day.  At its maximum rotation, the panels would be elevated to a maximum height of 4.0m above the ground. Trackers and panels would be arranged in symmetrical rows aligned north to south.

Screening – A series of native vegetation screens would be planted at visible boundaries of the solar farm to reduce the visibility of the proposal and screen security fencing.

Supporting infrastructure – this would include inverters (which convert the ‘DC’ electricity produced by the panels into grid friendly ‘AC’ electricity); a small substation to connect the solar farm to the existing onsite electricity lines; internal access tracks; security fencing; a BESS (see below); and an operations and maintenance building.

The BESS is proposed to be 85MW in size with a storage capacity of 85MWh, although the final size will be refined as we progress the design of the solar farm.  The BESS would be housed in containerised units, and would likely make use of lithium battery technology. BESSs are often exactly the same technology as the units that are fixed to houses to support domestic scale solar, just at a larger scale.

With an increase of renewable energy in the national electricity grid, BESSs are useful in providing grid support:

The project has received its Secretary’s Environmental Assessment Requirements (SEARs) and we are currently working on the studies required to support a formal Development Application for the Proposal (step 4 of the graphic below).  Technical studies include comprehensive assessments on landscape, noise, ecology, transport, socio-economics and ecology, and are likely to take until at least Spring 2022. Note for a full list of required studies see our issued SEARs document on the Department of Planning and Environment’s website here.

The technical assessments will demonstrate whether the study area can accommodate a solar farm, and will provide us information to determine the size and scale of any proposal. The team will then continue to revise and improve the layout design based on assessment findings and community feedback.

Key documents providing information about the proposed Clarence Valley Solar Farm will be posted on our documents page from time to time.  See this link.